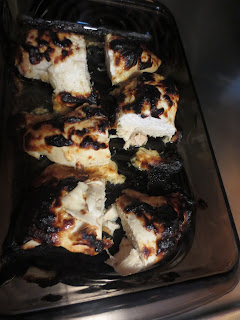 Yesterday was a good friend’s birthday. When my sister mentioned getting the girls together for a day of fun, I offered to cook dinner. I love cooking, but find it really hard to cook for just one (or occasionally two), so I jump at opportunities to cook for big groups.  I asked the birthday girl what she wanted for dinner and her response was “chicken.” I love cooking chicken, so this worked out well.

I set out on the search for a new recipe to try that involved chicken and found one on my Pinterest “$Eat$” board. I found a recipe that I pinned a while ago and set out to get the ingredients. I picked them up at the store and baked the chicken according to the directions on Pinterest. Below is a picture of the result.

Notice that it’s slightly crispy on top. The picture I saw on Pinterest looked nothing like this. I used the directions that were listed on Pinterest because I was in a hurry to get out the door and down to the store. Hence, the not so lovely result. Next time, I need to click all the way into the recipe and I’ll see that it is a very different recipe. Lesson learned.

How did it taste? Well, despite the crisp look, it still tasted very yummy!

Now on to the next part of the meal – the potato salad. This recipe is one that I learned while visiting my boyfriend’s mom. She served it one night and I fell in love with the dish, so I asked for the directions to make it. They are very simple and I will include them below the next picture. 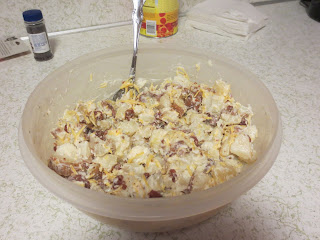 The directions for this dish are very basic. Take red potatoes and bake them in the oven for about one hour at 350 degrees. Then, place them in the fridge to cool. About an hour later, cut up the potatoes into small pieces and put them in a bowl. Add ranch dressing, finely shredded cheddar cheese, and bacon pieces to the bowl. It doesn’t take much of any of these – I just estimated what looked nice. Then, stir it all up and serve! Watch people come back for seconds.

No birthday celebration is complete without a cake. I created an ice cream cake for the occasion using a recipe I’ve tried before. It is pinned on my $Eat$ board, but the first time I made it was before Pinterest existed. I saw a pin from someone else and repinned it as a  reminder. 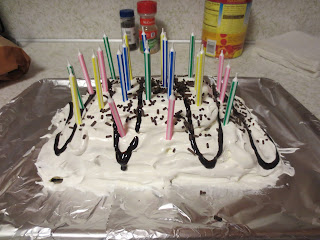 Basically, you layer ice cream sandwiches in any fashion that you would like and cover them in whipped cream. Top it with chocolate sauce and sprinkles and you’ve got a homemade ice cream cake. Make sure you put it back in the freezer when you’re not eating it or it will melt!

Overall, I felt dinner was quite a success. I tried out several new recipes and was delighted with the results. Keep a look out for new recipe reviews every Monday! Thanks for reading. 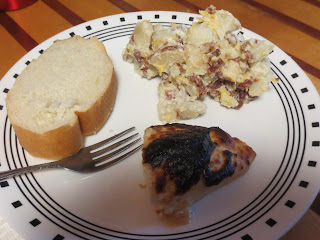