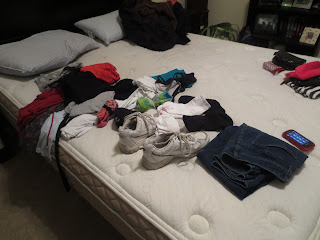 As I said yesterday, I feel like all I’ve done in the past two months is pack – either myself or others. One of those packing adventures included packing for my first plane trip. This was perhaps the most challenging of my packing. I’m always up for a challenge though and you can bet I tackled this one with style.

The challenge: Fit a week’s worth of clothes into a carry on so that I wouldn’t have to check any bags on the plane ride back. I was setting out to meet my boyfriend’s family in Arkansas (for the first time) as I got him started on his journey to California. I rode in the car with him to Arkansas, but brought a plane back to South Carolina when he headed out for the next leg of his journey. You can only do so much when his move is at the end of the school year. I couldn’t miss the end of the year with my kiddos.

I started by laying everything out on my bed that I wanted to pack. A few items (including the sheets) are missing because I was in the midst of doing laundry as well. I just accounted for those items as I went along. 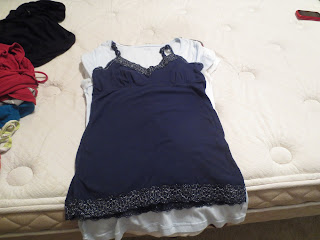 Then, I grouped them by type and laid them on top of each other. I had done my research on the web about how to best pack a carry on for a plane. I found several useful blog posts that had been pinned and used them when packing. 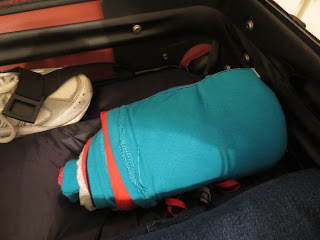 After laying things on top of each other, I rolled them into a roll and put them in the suitcase. According to the blog posts and from my knowledge of military packing, this seems to be the best way to save space. Rolls of clothes take up less space than folded clothes. I believe that after this packing adventure. 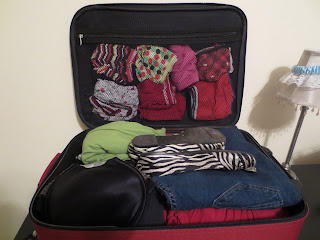 This is the final packed suitcase. I made sure I used every nook and cranny to pack things. Socks were placed inside of my tennis shoes (which are on the bottom of the suitcase), flip flops were put in the front zipper, and other pieces were stuffed in where I could fit them. I decided ahead of time that I would wear my bulkiest shoes – my boots – on the trip to keep from having to put them in the suitcase. I also decided that I’d take a large purse so I could pack my book and toiletries in there. Most of my toiletries actually ended up in the trash before I left Arkansas because I had packed travel bottles that lasted me the week and then they were out. 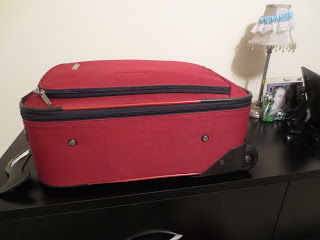 The last test was to see if it closed – and it did! I was very pleased with myself and then I started to wonder if I would be able to repack it the same way once the trip to Arkansas was over and I actually needed to get on the plane. In case you’re wondering – I did get it repacked into the carry on and a large purse. I didn’t have to check any bags which was my goal. There was one downside though – no room for souvenirs!