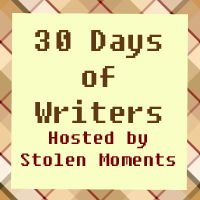 The next writer that I have chosen to share with you is one that I’ve met in person! I knew I was going to like her when she chose to host a local NaNo prep night at the exact same place that I met my boyfriend.  Allow me to introduce Kate…

1. Please tell us a little bit about you as a person.

Not quite sure what to put here. I am twenty-eight years old. An avid reader and dog lover. I love to watch anime, play video games. I also make jewelry and knit.

I had a really crazy dream (which is how I base a majority of my novels). I guess you could say that it affected me to the point where I just had to write it down. I was in middle school when I started writing. I had a couple poems published in both the high school and college print books (where they have drawings and writings of students) I’ve also written fanfics and have them posted on a couple of fanfiction websites.

3. What types of writing have you written? Which is your favorite to write and why?

I’ve mostly written romance, though I have dabbled a little bit in thriller and mystery. I love to write romance, probably because I’m a bit of a romantic at heart.

4. What are the three things you need at your side as you write? Why?

Three things… All of which are on the computer. Whenever I sit down to write, I always try to keep (just) four windows open. One would obviously be the document housing my work in progress. But the other three are just as important (at least in my point of view):

1. My notes- I have a program that keeps my notes organized, and as I move from section to section in the novel, I can do the same in my notes.

2. My music- I don’t have a set playlist that I keep on hand during my writing time, just whatever I’m in the mood for. However, sometimes, I’ll find the song that best fits the novel that I’m working on, and I’ll wind up playing it for a while. Mostly though, I play moderate to rapid tempo songs, because I get the words out faster.

3. A Count-down timer- Definitely helpful, either I’m trying to get a certain amount of time into the novel before I step away (usually when I’m getting frustrated with the novel or tired of it), or (the main purpose) to test myself to see how many words I can get in a certain period of time.

5. If you were to give other writers one piece of advice, what would it be?

Does it have to be just one? Don’t force yourself to write straight through. For years, I tried to write from one chapter to the next, from beginning to end. And always the same thing would happen: the dreaded writer’s block as well as boredom. And I would be stuck with it for ages, at least until I would go back and re work what I’ve written. Last couple of years, I’ve tried something different: writing by scenes. It seemed to make a difference. When I’d get stuck on one scene, I’d just move on to the next, and usually I’d figure out how to move past that block. It can be a little bit tricky, but for me it works. Make a starting point. I know a lot of people say to make detailed outlines and that sort of thing. For some it doesn’t always work. But I do know that having a starting point (not quite as extensive as an outline) helps me out a lot. Having notes to keep the storyline, and other elements of the novel together in one place certainly makes it much easier.

6. Where can we find out more about you?

Unfortunately, I do not have anything (original) writing related on the internet. Hopefully, I will soon.