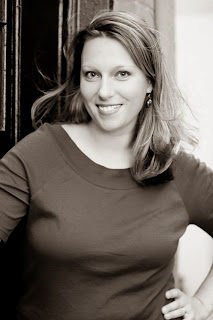 Over a year ago, I met J, whom you’ve heard me mention on several occasions. We met last June and started dating in August. J is a member of the US Coast Guard. As I was browsing the web randomly one night, I found a group of Coast Guard wives and girlfriends who had an entire message board and community formed. I joined the community and have been extremely happy to meet many amazing women through the boards. They really help me keep my sanity in the midst of a long distance relationship.

Now that you have the background to how I’ve met some of these writers, I’d like to introduce Krys Hannum. I was excited to learn more about her and to see that we have some similar interests – writing, blogging, and photography to name a few. If you don’t read any other part of this interview, at least scroll to the bottom and read her side note – I love it! It gives hope to this long-distance girl.


1. Please tell us a little bit about you as a person.

There once was a little girl who grew up among tall wheat fields, curving hills, and fish-filled lakes that coaxed the wind to push giant sails of cotton canvas across the water’s surface.

The innocence, wonders and beauty of this place spoke deep to the creative spirit inside the girl, and as she grew so did her love for designing and crafting beauty, first in the form of capturing images destined for display, and later in both useful and fanciful projects for her beloved family and friends.

Now the little girl eventually grew into a young woman and along with a creative spirit dwelled an adventurous force. The young woman gave into the adventure and set out for worlds unseen by her eyes, a world of boats and endless views of water and helping people and fighting bad guys. Over time, the young woman met a young man who was also filled with these adventures, and after a very short courtship, the two became one.

The young man and woman went on very happily in life. Eventually they added three tiny boy bodies to their little world and the woman’s adventures shifted to chasing away bedtime dragons and conquering mountains of laundry.

One day, the creative force inside the older (and wiser) woman declared that it would not be silenced any longer and unleashed itself! The woman recognized the importance of the upheaval and took an oath to fulfill her destiny, sacrificing what little free time and sleep to pursuing all things creative… and so she did.

As a teenager I always had a journal of some kind and would scribble away the fanciful notions of childhood, though I never really had a love for writing. I joined the Coast Guard in 1998 and was first published in the Coast Guard Magazine in 2000. After becoming a public affairs specialist in 2001, I wrote several long and short features that were published in a couple publications, but mostly the Coast Guard Magazine. The majority of my writing was done from 2001-2006 when I was active duty. I’m currently a reservist and only write about 1-2 stories a year now, mostly for the Compass Blog (the Coast Guard’s official blog) and the Reservist Magazine.


3. What types of writing have you written? Which is your favorite to write and why?

As a military writer, most of the writing was news stories with occasional feature stories, but for a while I also kept a personal blog (http://hannumhomehappenings.blogspot.com). Nowadays I do mostly feature writing for the Coast Guard, and my favorite type of story to write has been and is personality features. I love talking to someone and really getting to know the deep-down guts of who that person is, and then telling other people about just why that person is so special.


4. What are the three things you need at your side as you write? Why?

Hmmmm, I don’t really have any rituals or must-have items, but I do like to listen to some music – piano preferably – and have coffee nearby. I also need to be completely alone, as in away from my children! I love my boys but they suck a lot of creativity out of me!


5. If you were to give other writers one piece of advice, what would it be?

One of my writing instructors once told me a successful story needs to address 4 things: 1) What was the goal or purpose of the project/mission?  2) What were the obstacles to achieving the goal? 3) How did you overcome the obstacles? 4) What did you do to promote the project/mission? I’ve asked these questions in every single news and feature story I’ve ever written.


6. Where can we find out more about you?

My passion is photography so my website and FB site is geared towards that, but I can be found at https://www.facebook.com/pages/A-Creative-Light/209190505776694

Here are some links to a couple of my pieces:

An interesting side note about me… In August 2001 (I had been a petty officer for about 3 months) I was sent to the Coast Guard Cutter Eagle for a week and was required to write something for a joint-service military magazine geared to high schoolers. I choose to write about two crewmembers and for the week followed them around the ship taking pictures and learning about them. One of my “subjects” asked me out on a date at the end of the week and we exchanged numbers before I headed back to Virginia and he stayed in Connecticut (and a month later he PCSed to Oregon).

Two cross-country trips, endless phone conversations and four months later we got engaged, two months after that the story was published, and in April 2002 we were married. He is my prince from the story 🙂 I like to tell people that we are still writing the story. I wish I could send a link to the story but the magazine is no longer published (it was called Profile) – though I do have the story framed in our home.