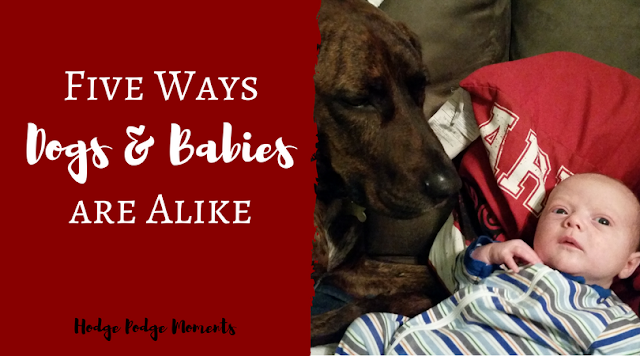 Prior to having Baby Fox, I would read these articles from moms and furmoms alike on the subject of comparing dogs to babies. Many of the articles argued that the two shouldn’t be compared and in many ways discredited the responsibility of a pet parent. For us, our dogs are a part of the family and having a baby hasn’t changed that. In fact, having a baby has allowed me to see the many ways that dogs and babies are alike.

We played gift bingo at my baby shower. With this game, you’re given a blank bingo card and you fill in items that you think the mom-to-be is going open. Even though I was the mom-to-be, I filled out a card just for fun. My best friend was sitting next to me and had to laugh when she saw “chew toy” on my card. Teething toy was escaping my mind and chew toy was the only thing that came to mind. Everyone at the shower reminded me that dogs play with chew toys and not babies. It was a simple mistake of not being able to remember a term but now it has me thinking – dogs and babies alike in many ways. I thought I’d have a little fun with this post and share just how much they are alike.

There’s a slight communication gap that exists between dogs and their owners. A similar communication gap exists between babies and their parents. Dogs use body language and barking to let us know what they want, while babies use body language and crying to express their needs. Good owners and parents learn to decipher these cues to figure out what their dog or baby wants. In both cases, we’re left wondering what’s going on in their little minds and hoping that we’re giving them what they need.

Toys go in the mouth.

Dogs have four paws and no easy way to pick up toys, so they use their mouth to carry and play with things. Babies have hands and opposable thumbs, but they still choose to explore things with their mouth – especially when they’re teething. Both love putting toys in their mouth and chewing on them. Whether it’s a “chew toy,” or a “teething toy,” they both end up in someone’s mouth. And in some cases, they even look alike – squeaker and all! 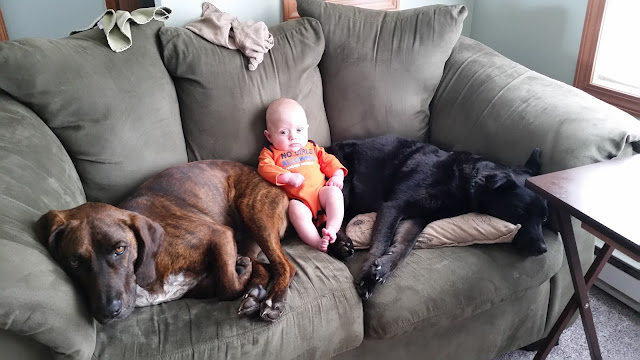 Our three hanging out on the couch together.﻿

Both need a lot of rest and it’s not always on your schedule.

Have you ever noticed how a dog tends to be go, go, go until they suddenly crash? Babies tend to have a tendency to do the same thing. Both tend to alternate between periods of high activity and sleep. It’s not always on a schedule either – especially the adult’s schedule.

Both rely on you for their basic needs.

Food, water, shelter – it’s all in the hands of owners and parents. Dogs rely on their owners to keep their food and water dishes full. They also rely on us for a little clean up after they do their business. Babies rely on their parents for nourishment and a diaper change when it’s needed. As owners and parents, you’re constantly meeting the needs of the little ones in your life.

Both seek comfort from those around them.

This one might not be true for all dogs, but it’s certainly true for ours. As owners and parents, we’re the constant in our pets and kids life. They look to us for comfort when they’re scared or upset. For example, Mr. Gibbs is scared of thunderstorms and will often seek us out for a little reassurance. Baby Fox calls out for us when he wakes up in his crib alone because he wants the reassurance that we’re still around. Both need our attention and care to feel loved and secured.

Now, I’m not naïve. I realize that there are also a lot of differences between dogs and babies. That’s not what this post is about though. I simply wanted to take some time to reflect on the ways that dogs and babies are similar. I’m a parent to both and find that they take turns being more challenging.

Do you have babies or dogs in your life? Can you relate to any of the similarities I mentioned? I’d love to hear about it in the comments below! 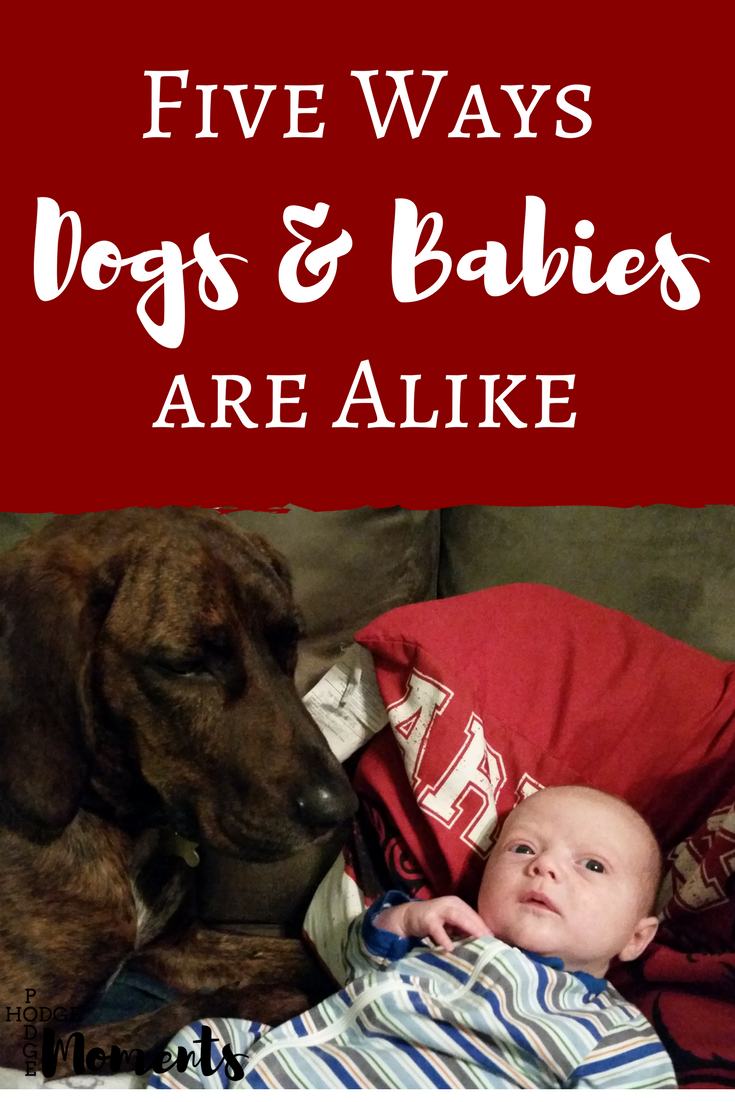