Why I Stopped Eating Dairy and Soy 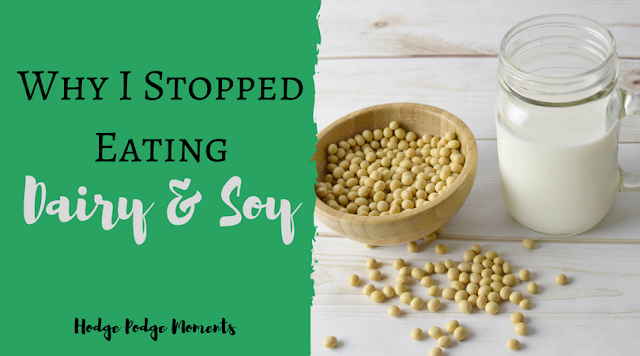 I have tried many lifestyle changes over the years – especially when it comes to food. Some have lasted longer than others, but even with those that have lasted a long time, I have had a “cheat day” here and there. At the beginning of June, I gave up dairy entirely and by mid-June, I had given up soy as well. This time, there have been no cheat days – only accidental slip ups that upset me when I discovered them.

Why would I give up dairy and soy? What’s the significance behind these two seemingly random choices? That’s what I’m diving into today – with a story that starts all the way back at the beginning of my own life.

*Affiliate links are used in this post. They don’t hurt you in any way but I do make a little bit off of them which helps me keep the blog up and running!*

I’m going to go ahead and warn you that this post probably needs a TMI (too much information) warning before we get started. While it won’t get graphic, there will be some mention of spit up, vomit, and poop. If these topics make you uncomfortable, I completely understand!

Let’s start at the very beginning – of my life. I’ve heard my mom tell the story over and over again about how sensitive I was to dairy as a baby. They had to switch to soy formula because I was “losing it from both ends” as my mom likes to say. From what I understand, there was lots of projectile vomit and nasty diapers to go with it. Turns out, both my parents were sensitive to dairy as babies. Once they switched to soy formula, things were better. My sensitivity lasted for about a year or so until I eventually outgrew it.

Flash forward to the birth of Baby Fox. I knew about my past. I knew about the family history. So, I was keeping a close eye on Baby Fox to see if he showed any signs of a sensitivity. With breastfeeding, the signs were less obvious but they were there (or so I thought). He was spitting up excessively and fussy for no apparent reason. So, when Baby Fox was around a month old, I made the decision to cut out dairy thinking it would help. I gave it two to three weeks because it can take a while to leave the system and we saw virtually no improvement. So, I concluded that dairy wasn’t the culprit after all and we continued forward. He wasn’t in pain so the spitting up just seemed to be a laundry problem and the fussiness seemed to improve when we helped him establish better sleeping habits.

Around four months old, things suddenly got worse – much worse. His spitting up increased and it seemed to hurt him. He started arching is back when he would nurse. His poops took on an irregular color with dark streaks in them. We took him to the doctor and they suggested that it might be a stomach virus that was going around. When the test for the virus came back negative and his symptoms didn’t improve, we took him back to the doctor. This time, we were given medicine to help with his reflux but that was about it.

My mother’s intuition told me otherwise, so it wasn’t long before I decided to cut dairy out of my diet again. Things got a tiny bit better, but not much. We were playing on the floor one day when another large spit up happened and something clicked in my head. We had tried soy formula twice and both times he had thrown up afterwards, but we had connected it to other things not realizing that it was the formula. I’m not sure why it took me so long, but I suddenly realized that soy was the problem and headed to the kitchen to look at a few of the things I had eaten recently. Sure enough, soybean oil was an ingredient in several of them.

This led us down the path of cutting out soy, which has turned out to be much harder than dairy. Soybean oil is in almost everything! We currently eat a lot of meat and fresh foods. We’ve also dived into making our own breads on occasion. Cutting out soy helped a lot! His spit up has lessened and his poops improved greatly. In addition to this, the dry skin on his head has disappeared and his face no longer has “baby acne” which we were told was normal. He’s also a very happy baby except when he’s tired and who can blame him there – we all get a little cranky when we’re tired.

We recently tried reintroducing dairy to see if it is a culprit at all. He reacted a little, but not as much as he does with soybean oil. We’re still avoiding dairy for the time being, but it’s comforting to know that we found the true culprit behind his reactions.

I’m not going to lie – I miss cheese and ice cream from time to time. I have managed to find a few items (nutritional yeast is a life saver!) and lots of great recipes. Overall, giving up dairy wasn’t as difficult as I thought it would be. Soy, on the other hand, has been a difficult one because soybean oil is in almost everything!

I’m considering taking the next step and giving Whole 30 a try in August. Have you ever completed a Whole 30 challenge? I’d love to hear your thoughts in the comments below!