15 Ways to Announce a Pregnancy 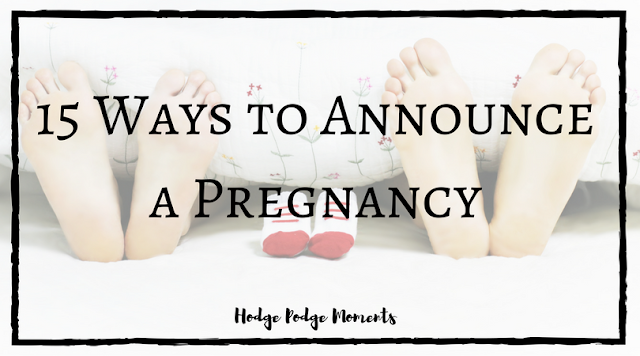 In case you missed it, I announced something special Wednesday on the blog. I announced that we’re expecting our first child in February and that I’ll be sharing updates every Friday. Since I shared my latest update on Wednesday, I thought I’d share some of the fun ideas I came across when I was trying to decide how to announce our pregnancy. There are just so many cute ones out there!

Deciding when and how to announce a pregnancy isn’t as easy as I thought it would be. I’ve been that girl pinning ideas for a couple of years now (pretty much since my sister was pregnant). I’ve always kept them to a secret board so that no one got suspicious at the wrong time. I thought I’d know exactly how to announce the pregnancy when the time came. I was completely wrong – there were just too many ideas to pick from! Since I finally decided on how to announce, I thought I’d share some other fun ways with you in case you’re struggling to come up with your own announcement!

Use the holidays.
Using the holidays is a great way to make the announcement more fun. There are two different ways to use the holidays – you can use the one closest to your announcement day or you can use the one closest to your expecting day. One of my friends publicly announced her pregnancy around Halloween. She sent out cards to family and friends with pumpkins carved with a picture of a stork and the expected arrival date. Another friend announced around the Fourth of July and referred to the baby as their “little firecracker.”

Use your shoes.
You may have seen this one before because it’s a classic favorite. For this one, you’ll need two adult pairs of shoes and one miniature baby or child sized pair. Arrange them with the child’s shoes between the adult shoes and add text to announce the expected arrival of your little one. My sister did this for my nephew with cowboy boots and it turned out super cute. Another variation is to sit beside your significant other with your shoes facing the camera. Write the announcement on the bottom of your shoes and take a cute picture to share!

Use the infamous stick.
I don’t personally like using the pee stick for an announcement but everyone is different so I thought I’d include it anyways. There are many different ways you can incorporate that lovely stick into a fun announcement.

Use a shared interest.
This one can extend to board games, video games, and sports. You can use your favorite board game, such as Life, to announce that you’re going to be bringing a little life into the world. Alternatively, you can announce that a third player is coming using video game controllers or sports jerseys!

Use cute cards to share your message.
You can send or give cards to your friends and family to announce the pregnancy. There are many different sayings you can use. I personally like using cards because it makes the announcement more fun and gives your friend a keepsake. Cards are especially great for long distance friends that might not use social media. A couple of days after finding out I was pregnant, I headed over to hang out with one of my best friends. I knew she was going to offer me wine so I drew a wine glass on the front of a card with the message “I decided to quit drinking.” The inside gave the details of when we were expecting. After I turned down the glass of wine, I gave her the card. It made for a really fun reveal!

Use hints to reveal your pregnancy.
Hints are another great way to announce your pregnancy. We used this method with a lot of our family since we shared with them way before we shared publicly. A few examples include calling his mom and casually calling her grandma. My favorite of the hints was texting my sister a cute graphic of an ant. She guessed right away.

Use a picture.
I’m not even going to go into all of the possibilities that come with pictures. Some of them have already been mentioned under other categories. You can add in a sense of humor or seriousness with pictures. A picture is the perfect way to showcase your personality with the announcement.

Use the furbabies
Do you have a pet? Will it sit still for a photo? Get them involved in the announcement! I have seen several cute ones done with the pet holding a sign that says “They’re getting me a tiny human!” This is a great way to announce, especially if your pets are your current “babies.”

Include your other kids
Is this your second, third, etc kid? Then it’s the perfect time to get the kids involved in announcing their new sibling. This can be done with clothes, chalkboards, or another props sharing the news. Make sure you tell your kids the news first though!

Use the laundry.
This one had to make the list because it’s almost the one I used! Take your socks and a tiny pair of socks and hang them on a clothesline. Then add in the text “Laundry is about to get a lot cuter!”

Onesie or other baby item.
An easy announcement to do is simply using a baby item to announce the pregnancy. Some people will take a onesie or pacifier and include a special message with it before sending it to grandparents. You’re going to need the baby stuff eventually so buying a piece or two for the announcement is fine!

Use the great outdoors.
Get outside to create your message. You could write it in the sand or dirt. You could also use rocks or flowers to announce the message. If you’re a fan of the outdoors, try to incorporate them in your announcement somehow!

Take it to the kitchen.
Food is going to be a big part of your life as your little one grows inside of you and demands more food, so why not use it in the announcement? I’ve seen some cute ones where people put a baby bottle between their glasses or they share another small piece of food alongside its larger counterparts (bagel bites and pizza slices anyone?). Then there’s also always the classic “bun in the oven.”

Include it with a life event.
We recently moved an bought a three bedroom house. This was the inspiration for our announcement. I made use of a box and some of the baby items we had bought to announce that a nursery was coming to our back bedroom in February. You can see the entire announcement post here.

Just tell people.
Is creativity not your style? That’s more than okay! Simply tell people. It’s your life and your pregnancy – no one says you have to be fancy or creative with it. Simply be you!

Have you announced a pregnancy or seen a great announcement? I’d love to hear about them in the comments! 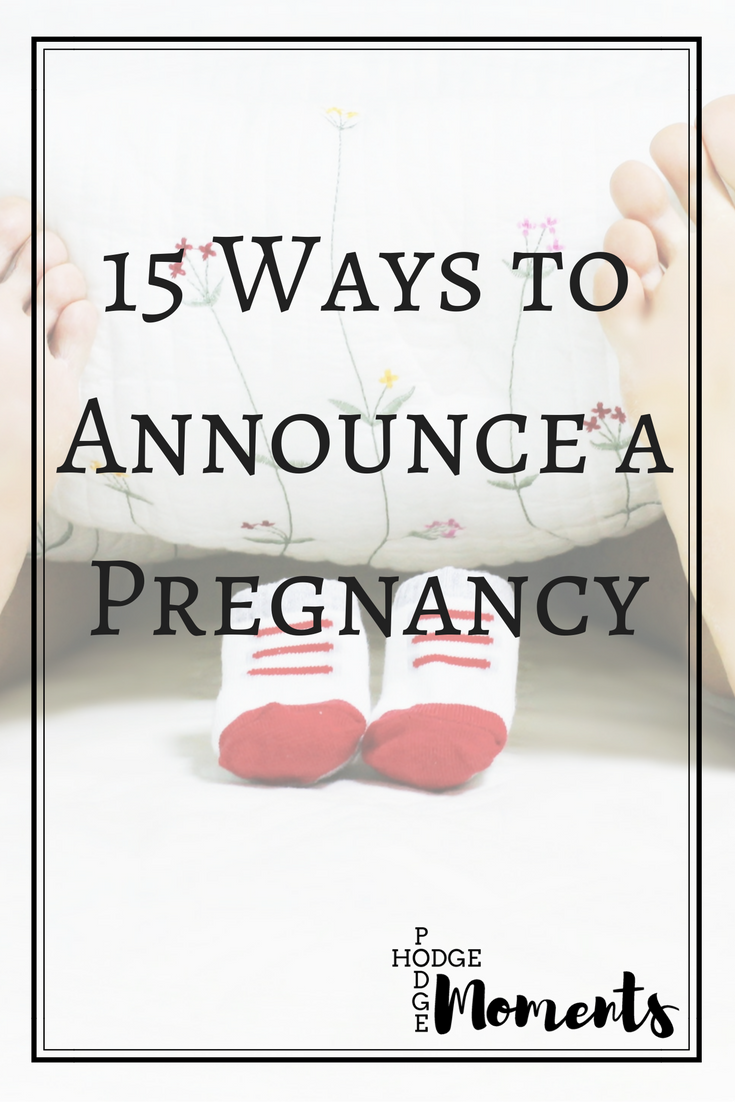