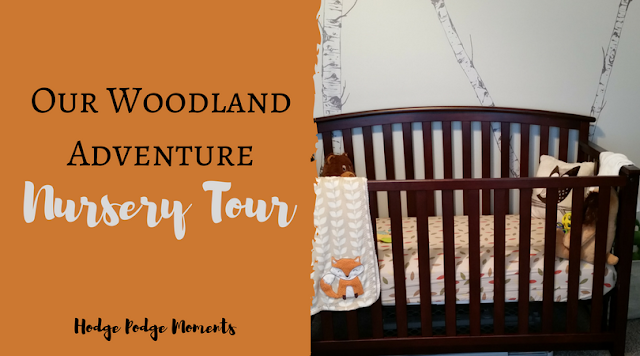 Last summer when we were relocated to Michigan, we decided to buy a house instead of renting. It made the moving process a bit more stressful but it was the right decision for us. We finally moved into our house in September and we’ve been changing and updating it in so many ways. We shared “before” pictures on The Coastie Couple as part of our surprise pregnancy announcement. We didn’t share a good before picture of the nursery because it was essentially an empty room with stained carpet and messy walls. We’ve had a lot to do in this house and it’s been a slow process with many life changes, but I’m finally ready to start sharing our rooms on the blog! We’ll be starting with our woodland nursery, which is one of my favorite rooms in the whole house!

*Affiliate links are used in this post. They help you find the objects mentioned and I make a tiny amount of money which allows me to keep the blog going for you!*

The nursery wasn’t finished when Baby Fox was born. We had the necessities that every baby needs, but the nursery was far from completed and it certainly wasn’t as cute as it is now. The truth is that your baby isn’t going to care about how cute the nursery is – it’s all for the adults. For me, having a cute nursery was important because I’d be the one looking at it often during diaper changes and nursing sessions.
Originally, I wanted to do this room reveal before Baby Fox came home. The room wasn’t finished though and life became hectic. Now, I’m glad I waited to share the room tour because you’re going to get more out of it. Instead of simply sharing how we plan to use the items in this room, I can share how we are using the room. One of my goals when setting up this house was to be intentional with our space and I feel this room is a great example of how I’m working to achieve that. 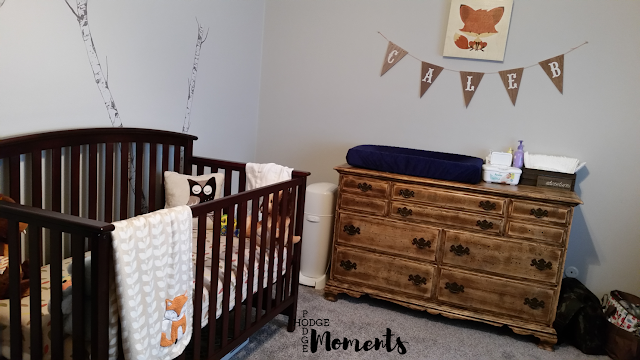 Here’s a quick view of what the room looks like. I’ll go into a bit more detail about these two sections in future pictures but I wanted to talk about the goals we had for this space.
The first goal was to make a functional space that could grow with Baby Fox over the years. The second goal was for the décor to be kid-friendly but not babyish. I love decorating but I didn’t want to be redoing a room in a year or two simply because he outgrew the décor. ﻿The third goal was to create a space that was calm and inviting. I feel like the soft gray paint that the husband picked out does a great job of keeping the space calm. The fourth goal was to keep it simple. This room will change as Baby Fox grows and starts to spend more independent time in it. Therefore, I wanted a lot of open space that could be used in new ways in the future. Our final goal was to keep everything budget friendly. We don’t have a lo of extra money to blow so we made careful choices along the way.
As you look through the pictures I’ve shared, you’ll see how these five goals came out in our choices. (I will be including links to the items we used or to similar items as much as possible with each picture.) 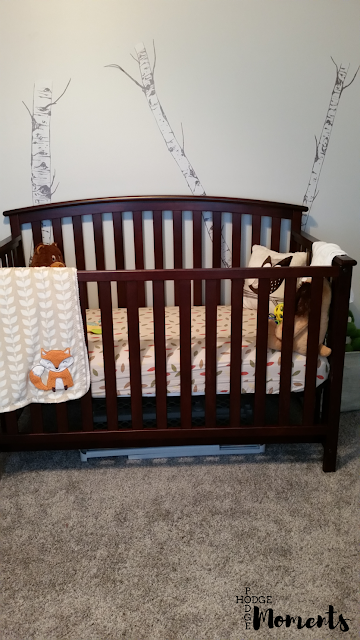 I wanted to keep things very simple with the crib. Safe sleep guidelines state that the crib should be empty and free from clutter. Baby Fox is currently sleeping in a pack and play in our room which is the only reason that you see a few toys in the crib.
We have three different bedding sets for the crib and each one changes the look of the room just a tiny bit. I put the leaves and fox blanket on for these pictures because I love the way the leaves look with the trees on the wall. This set was actually a hand me down from my mom. She used it in her crib for my nephew.
The crib was purchased during a Black Friday sale to save money. I didn’t want anything hanging above the crib that could fall into it but the wall did look a little bare. So, I chose the birch tree decals. They add a little décor while still being safe. I love looking at this space during nighttime nursing sessions.
Crib: Graco Convertible Freeport Crib in Cherry
Wall Décor: Birch Tree Decals (similar)
Sheets: Leaf Crib Sheets (similar)
Blanket: Carters Velour Blanket (discontinued) 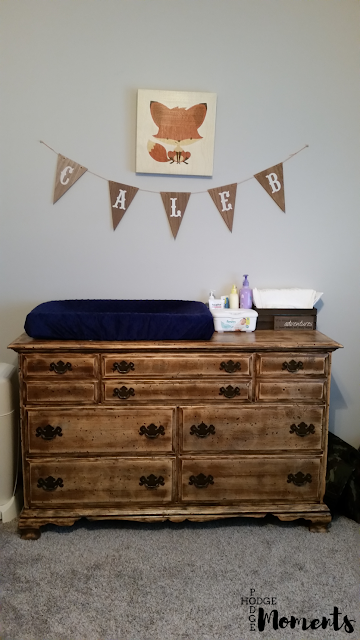 When I first started talking about the nursery, I was told that I would never use the changing station. “You’ll find that you just change him wherever you are.” I even prepped mini changing stations around the house anticipating that this would be true. Instead, I’ve found that if we’re home, he gets changed on his changing pad. In fact, he starts to smile when you put him down because he knows what is coming.
I’m not a fan of changing tables because they are a short term piece of furniture. That being said, I knew I would want to use a dresser for our changing station because it can grow with Baby Fox and it provides extra storage for clothes and blankets. This dresser was actually one that was left in the house by the previous owners. It wasn’t in the best shape, but with a little elbow grease from the husband, we now have this gorgeous piece that was almost free.
Dresser: DIY tutorial
Changing Pad: Four Sided Changing Pad
Changing Pad Cover: Navy Changing Pad Cover
Wall Décor: Fox Canvas (similar) and Banner (similar) 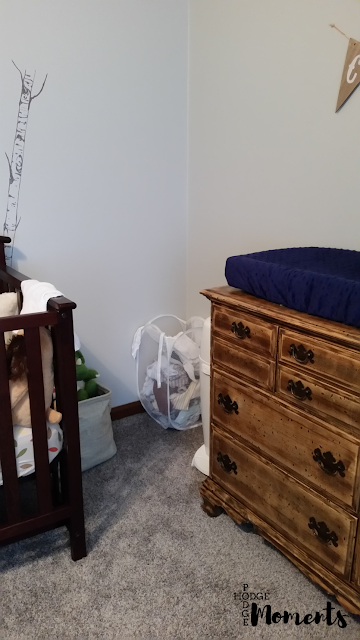 One of my goals when setting up this room was to make things as easy as possible. Our diaper pail is directly next to the changing station to make things easier during a routine diaper change. I didn’t want to be running all over the house after a diaper blow out with dirty laundry so I placed a small hamper in the corner. This was a great decision because it makes our bedtime routine, unexpected changings, and other laundry emergencies much simpler. When it’s time to do laundry, all I have to do is grab the hamper and head to the basement. There is also an extra toy bin hidden away in this corner.
Diaper Pail: Diaper Genie
Hamper: Pop Up Clothes Hamper (similar)
Toy Bin: Storage Bin (similar) 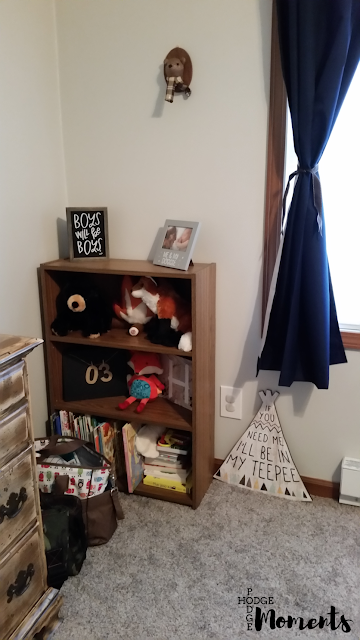 I’m a big believer in books for kids. I plan to eventually make a cozy reading space in this room that will encourage reading. For the time being, I’ve simply started his collection on this bookshelf. (Thanks to my friends in the Shield Sisters Sanctuary!) It’s swiftly growing though so I’m going to be looking for a new solution before you know it. You can also see some of the simple décor that I chose to include for now along with our two diaper bags. We have a camo bag for my husband and a cute owl bag that Nora got me as a gift.
Diaper Bag: Camouflage Diaper Bag (similar) and Owl Diaper Bag
Décor: Miscellaneous
Books: Keep an eye on Little Learning Moments instagram 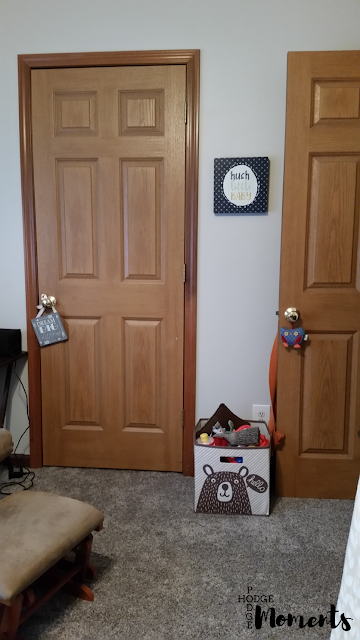 This is the closet and toy storage for Baby Fox. I didn’t think to take a picture of inside the closet. It has our travel system (stroller and infant carrier) along with some of the nicer clothes hanging and a few toys that he will need to grow into. It’s currently being used as a storage space but I have a few ideas for it’s future use. The toy bin currently holds random toys that we got as shower gifts. A lot of his toys are in an ottoman in the living room since that’s where we spend a lot of our time.
Bin: Bear Storage Bin (similar)
Travel System: Graco Stratus Travel System (not pictured – in closet) 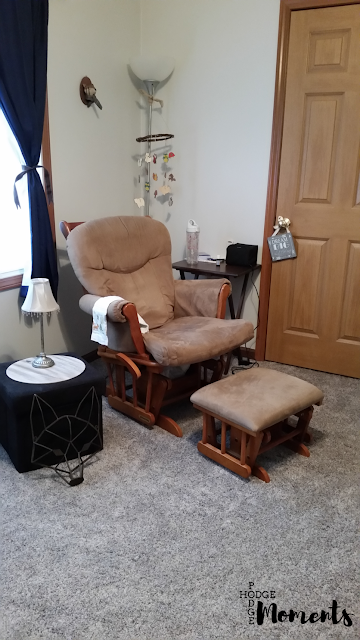 This is what I call the nursing corner. It’s used every night for our middle of the night feedings. I’ve spent a many sleepless nights trying to get Baby Fox to sleep in this glider. This is another area that I was told I probably wouldn’t use. In fact, I was the one that pushed for a glider because I wanted a comfortable place dedicated to those middle of the night feedings. In an effort to save money, I did find this one on a local yard sale page for $40. We brought it home, washed the cushions, and it was as good as new. The small lamp in the picture belonged to my grandmother and is our version of a nightlight right now. The tall lamp is used for middle of the night diaper changes so that we don’t have to turn on the big bright light. This is a corner that will likely change as Baby Fox grows but for now, it’s a corner that is used a lot.
Glider: Windsor Glider (similar)
Breast Pump: Medela Advanced Breast Pump (Don’t forget to see what’s offered through your insurance!) 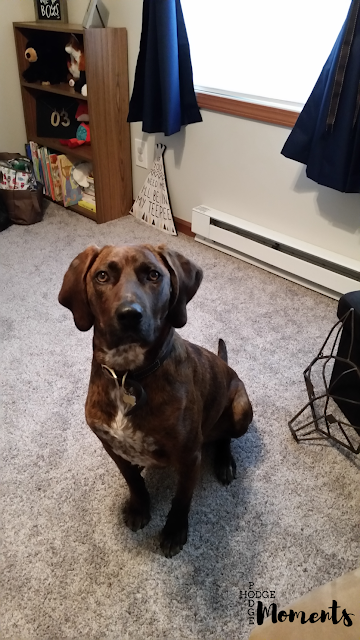 It wouldn’t be a true room tour if this fellow wasn’t following me around. Mr. Gibbs spent the entire room tour following me and trying to pose for pictures. I have never seen a dog that loves the camera so much. That being said, I included this picture to show that the nursery is a family space – we all use it in one way or another and it’s currently not “off limits” to the dogs. Mr. Gibbs has even been known to curl up during story time. If you’d like to know how we prepared the dogs for Baby Fox, I shared all of our tips in this post.
Dog: Not for sale
I’m so excited that I finally got to share this room on the blog! I’m working on getting pictures of the other rooms in the house as well, so keep an eye out for more room tours in the future! Until then, you can join the Facebook community where I’ll be sharing some of my organizing tips over the next few weeks!
P.S. If I didn’t link to something pictured that you’d like to know more about, just ask and I’ll tell you where we found it! 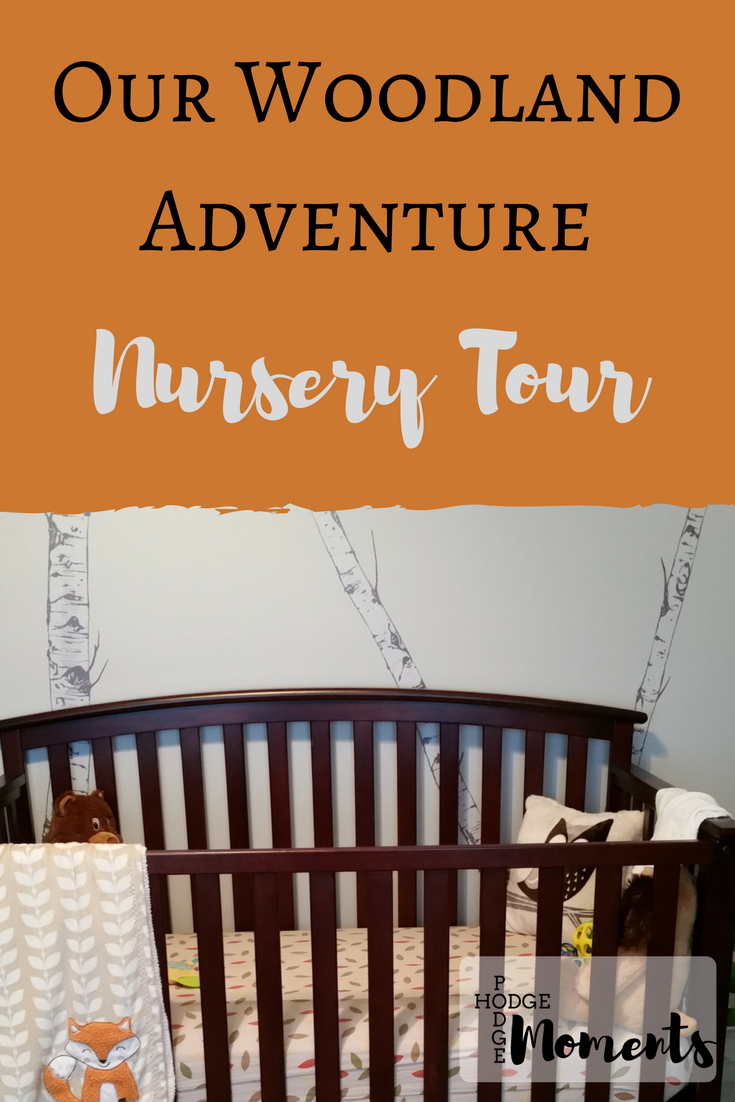