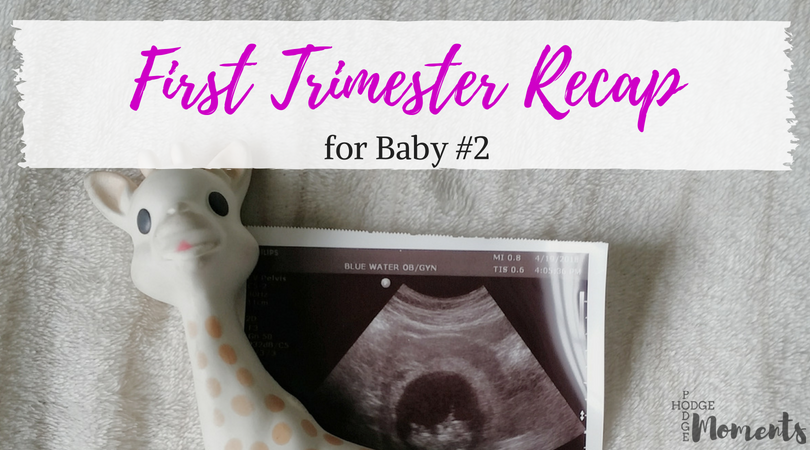 The first trimester had come and gone by the time I announced our second pregnancy. I’m not going to lie – it seemed like it took forever for it to pass. I think it’s because I was so eager to share the news with everyone. I will say that I’m glad we were able to share the news sooner with this baby than we did with Baby Fox. I was nearly halfway through the second semester by the time we announced that pregnancy. Since I wasn’t able to keep you updated during the first trimester, I thought I’d do a quick recap of how the first trimester went.

*This pot contains affiliate links. I do make a small commission from these links; however, I only recommend products that I love. You can view my disclosure here.*

I’m going to start by telling you that I was in denial about this pregnancy. With my first pregnancy, I knew that I was pregnant before I even peed on the stick. This time, I kept coming up with reasons for all of the other signs. Finally after missing my period for almost a week, I broke down and peed on a stick. There was no guessing – the test definitely had two lines.

I don’t know why but I waited until the start of a 48 hour duty rotation to take the test. I hadn’t even told Hubby about it. We weren’t necessarily “trying to get pregnant,” but we also weren’t preventing it. We were simply letting nature do her thing. I didn’t want to wait until Baby Fox woke, so I got up right after my husband left and took the test. It was a clear positive. (I’d share a picture but who really wants to see something I peed on?)

Baby Fox was the first to know. (I had to tell someone after all.) When he woke for the morning, I went in to get him and told him that he was going to be a big brother. Having no idea what I’d just said, he smiled at me and we happily went about our day. In between playing and having fun, I looked up ways to reveal your pregnancy to your husband. I played around with several ideas, but I’m very happy with the one I chose.

It was March and near Easter, so I decided to use Easter eggs in my reveal. We had many eggs in different colors that Baby Fox was happily playing with each day. I decided that it would be fun for Baby Fox to have an Easter egg hunt when Daddy got home. I put a cute little note in each egg and mixed up all the colors to make it more fun. The reveal was in a pink and blue egg and said “Baby #2 is due November 2018.” 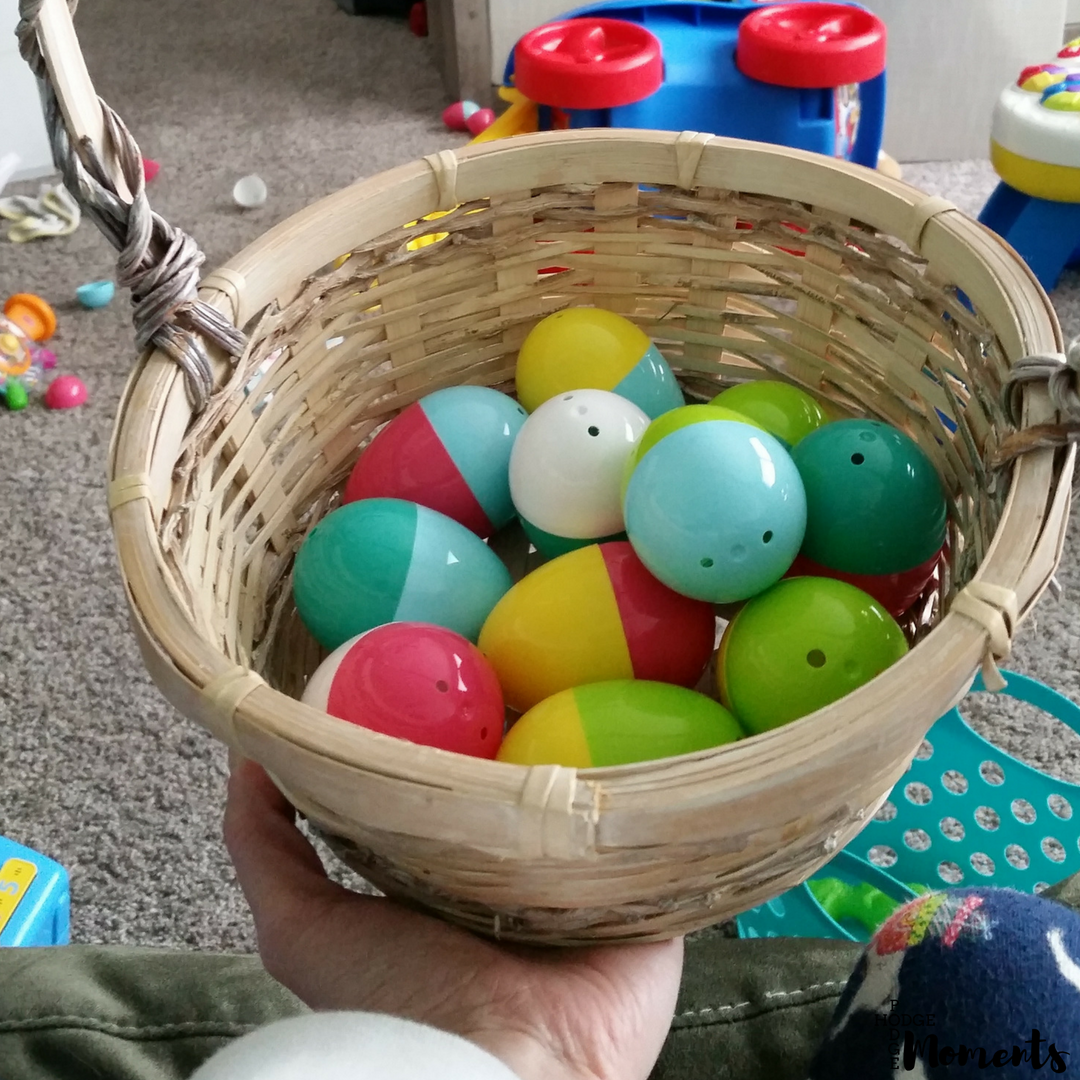 When Daddy arrived home after work, I told him that Baby Fox needed to practice his egg hunting skills and we all headed back to the nursery. I had already “hidden” the eggs in plain site. (Don’t forget – Baby Fox is only a year old.) Baby Fox just started screeching in excitement and we both laughed at his reaction. Then, Daddy set about helping Baby Fox collect the eggs. When they were all collected, I told him that he had to open them now. The second egg he opened had the reveal in it and his reaction was priceless. I really wish I had thought to record it. I may have been distracted by a one year old and a dog. 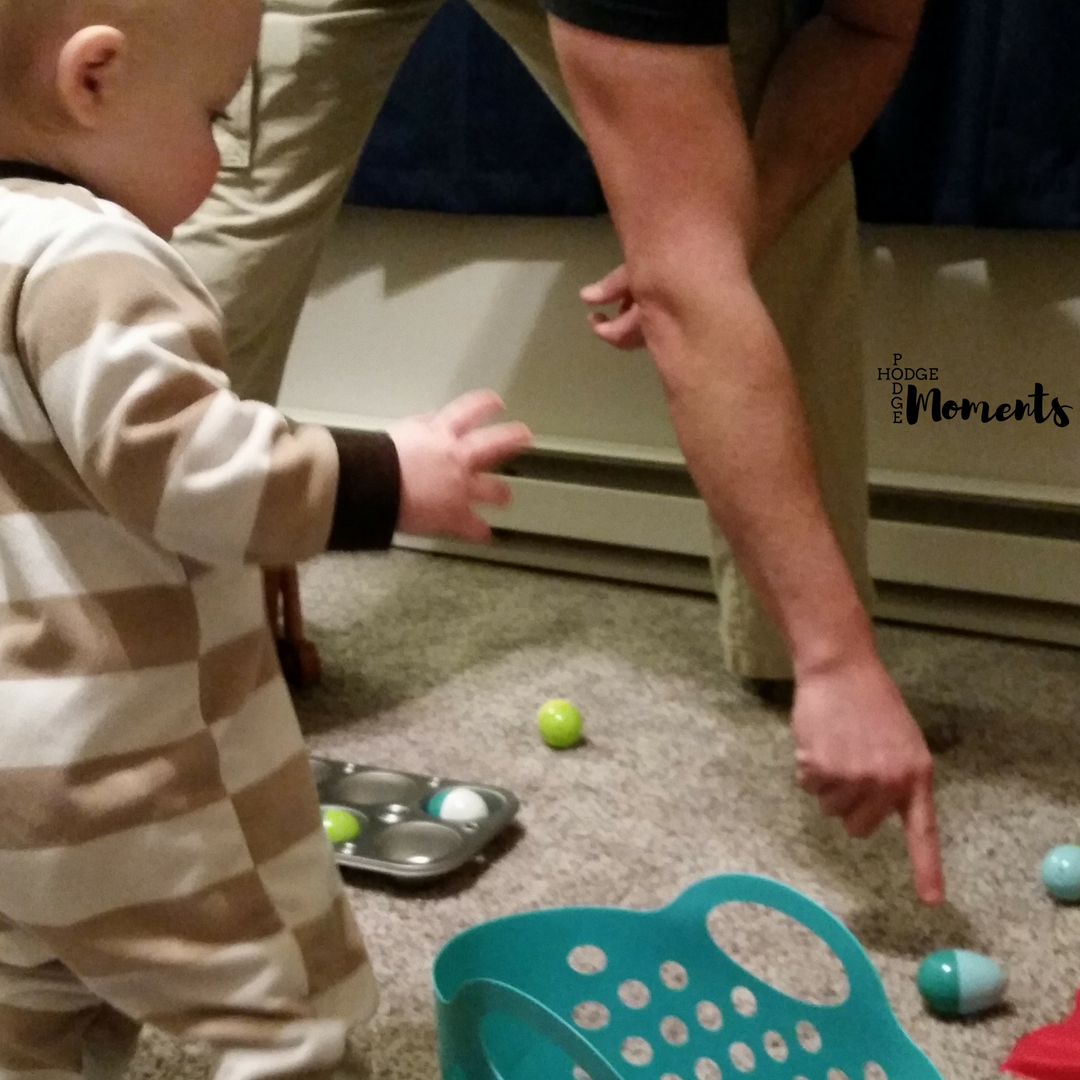 This pregnancy reveal was much more fun than the last one and I’m glad I included Baby Fox in it. We revealed the news to our family and friends in a variety of ways and I’ll be sharing those in a future post. Just like last time, our friends and family knew before I revealed it on the blog.

With Baby Fox, I was eager to get into the doctor’s office as soon as I could. With this pregnancy, I’ve been a bit more relaxed about those first appointments. I believe it’s because it took us so long to get in with our first pregnancy. We did make it in for our first doctor’s appointment at 10 weeks. We went out for lunch first and then Baby Fox and Daddy went to the bookstore while I went to my appointment.

It was a pretty basic appointment with peeing in a cup, a pap smear, and an attempt to find the heartbeat. My doctor couldn’t find the heartbeat with the doppler, so he did a quick ultrasound to take a peek inside. This was one of the first moments that things really started to feel real. There’s something special about seeing that tiny little thing in black and white on the screen for the first time. Other than that, it was a relatively basic appointment. 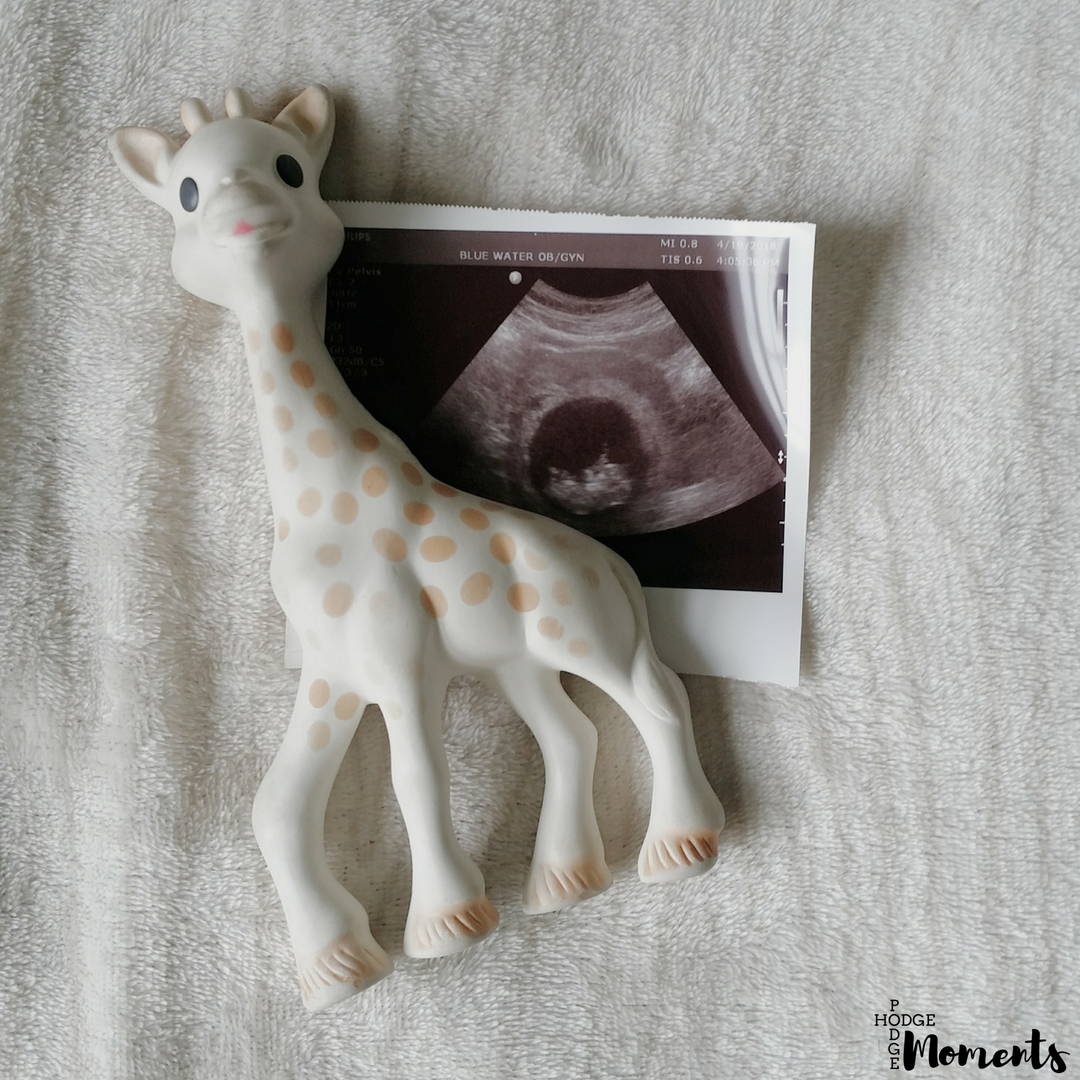 Even though we have several months until our new little one joins the family, we’ve already started making some adjustments and preparations for the arrival. One of the first things I looked into was weaning Baby Fox from breastfeeding. My goal was to breastfeed for a year and that has come and gone. I plan to breastfeed with the next one as well and would like a little break. We’re taking it slowly and weaning little by little.

We also started talking about how to arrange the nursery and the logistics of how things will work. We haven’t quite figured everything out, but we’ve started problem solving. I also talked to someone I trust about watching Baby Fox in the event that my parents aren’t here when I go into labor. There are a lot of logistics that go into growing your family and there are even more logistics when you have another little one in the picture.

With Baby Fox, I didn’t start a registry until after we knew his gender. With this baby, I started a registry about a week after finding out I was pregnant. At this point, the registry is more of a place for me to keep track of what we’ll need. I haven’t shared it with anyone else yet. We definitely won’t need as much for the second baby, but there are little things here and there that I keep discovering we’ll need. When I discover something, I had it to my registry using an app on my phone. I’ll share more details on registries in an upcoming post.

With Babies R Us going out of business, we have actually gone ahead and bought a few things for the second baby. One of the items we bought is even a big ticket item. We’re taking advantage of those sales when we can.

The first item we looked for and ended up buying was a double stroller. We went with a Graco double stroller so that our infant seat would connect to it.. The other item that we went ahead and bought was Sophie le Giraffe. Baby Fox has loved his Sophie toy, so we knew we would want another one for the next baby. I’m definitely keeping an eye out for great deals on the rest of the items we need for Baby #2.

I’m sure when you first started this post, you were expecting to get an update on me and how I’m doing. This pregnancy has been more difficult than the last one. I’ve experienced more nausea, exhaustion, and pains than last time. I’m also super moody and I don’t remember being a rollercoaster of emotions when I was pregnant the first time. Some of this is related to chasing a toddler around and other bits are just the characteristics of this pregnancy.

I’m excited to hopefully find out the gender of this little one next month. It’s easier to plan and picture the future when you know the gender. I’m also hoping that some of my symptoms level out a bit now that I’m in the second trimester. I remember enjoying the second trimester during my first pregnancy. All in all, I’m excited to welcome a new addition to the family.

Oh and as for a baby bump, let’s just say I’m in that uncomfortable place where half of the time I feel and look “fat” rather than pregnant. I’m ready for this bump to start growing and I’m even more ready to start feeling the little feet growing and playing inside of me.

Well, that’s my recap of the first trimester and a glimpse into what life has been like for the past few months. I’d love to hear how things are going for you in the comments below! Also, if anyone has any tips for a second pregnancy, I’m all ears! 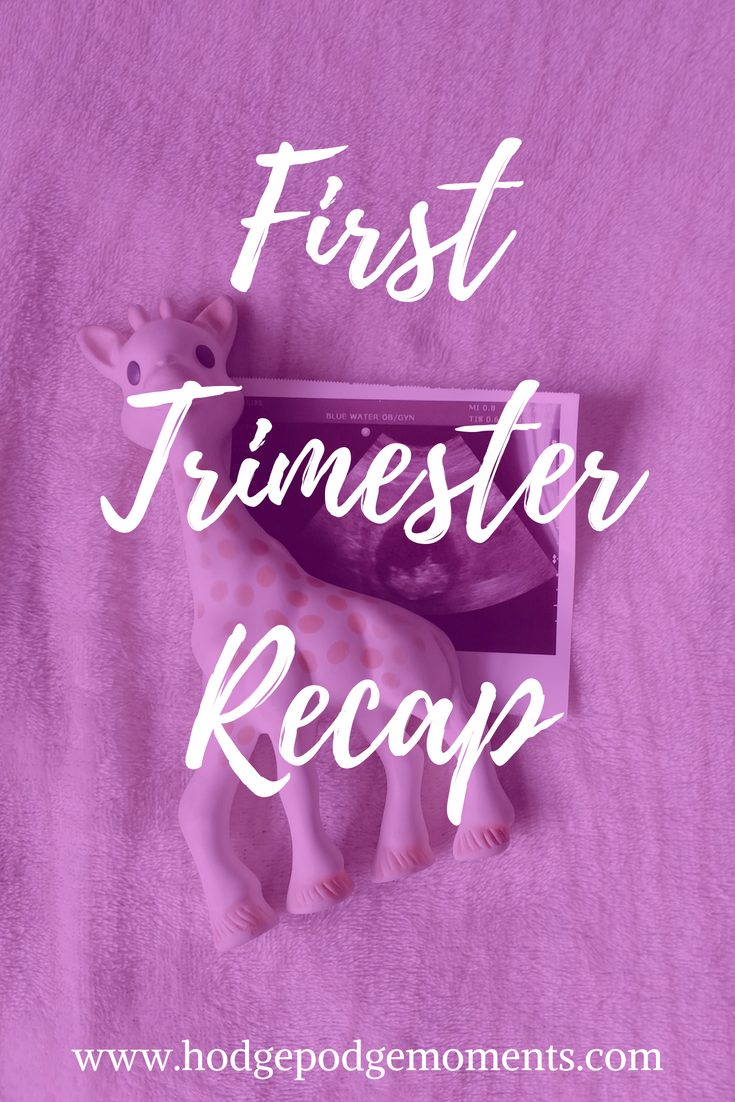