Stress Free Elf on the Shelf 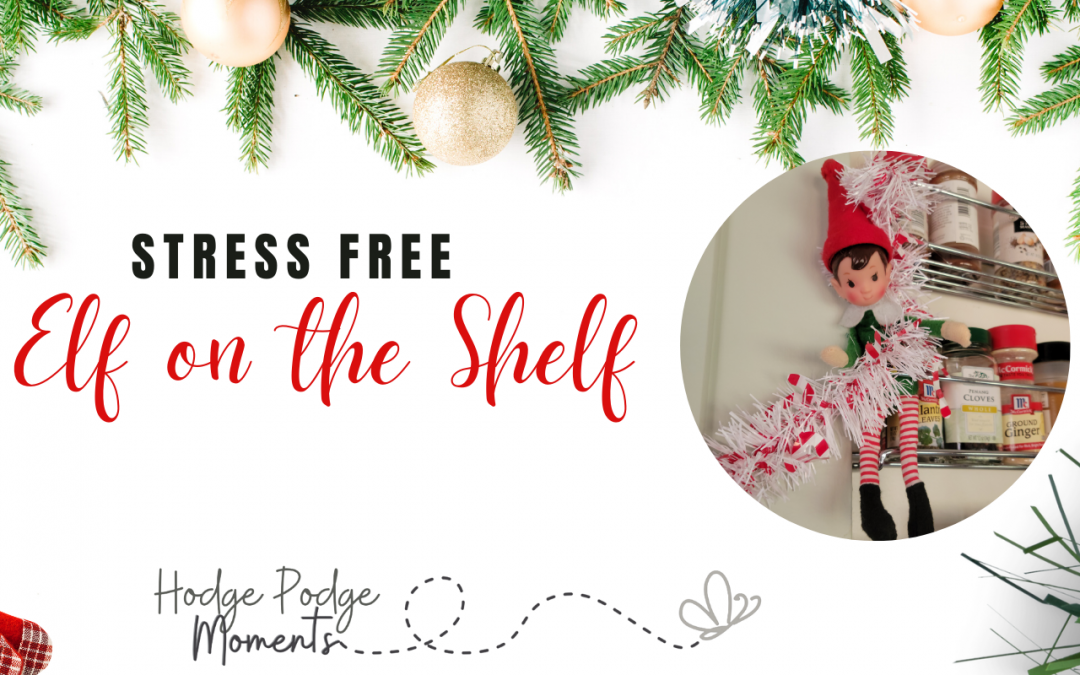 I know it’s not for everyone but I personally enjoy including Elf on the Shelf among our holiday traditions. It’s fun for the kids and as long as you don’t set any high expectations, it can be fun and not too stressful for the adults. I love seeing how they react each morning when they go on their hunt for the elf.

My first experience with the elf was actually long before I was a parent. It was around 2010 or 2011 and I saw someone else using the elf in their classroom during December. The kids were talking about it and my interest was peaked. I soon had an elf for my own classroom who made an appearance every December. The kids enjoyed his antics and I had fun bringing a new level of creativity into the classroom.

In 2014, I married my husband and moved from SC to CA at the same time. I was lucky enough to find a 5th grade teaching position in October but I didn’t have any of my teaching stuff with me. Uhauls can only hold so much. I missed my little elf but I also wondered if the fifth graders would even enjoy him. I had given up on the elf fun altogether until I came across a little $3 ornament at Target and an idea popped into my head.

Married Life with the Elf

I found this cute little elf with striped pants and a green shirt for just $3 at Target. I couldn’t resist and brought him home for some silly fun. We were in the midst of our first married deployment and email was our primary form of communication. So, I started putting the elf in funny spots and positions around the house and sending them to my husband. My hope was that it would brighten his day a little. It turned into something more when he returned home and started moving Willfare the Elf as well.

The following year, he was home for the holiday season and we decided to continue the fun. There were few rules except you had to be sneaky and the other person couldn’t see you moving the elf. This made for some fun, random movement as we took turns trying to surprise each other. Since we didn’t have kids, the elf wasn’t always PG so to speak. Our third year of marriage brought pregnancy and the last year of moving him around for just us. (I don’t think the dogs really cared about him.) We made a trip back to Charleston and Willfare tagged along to play with my parent’s elf (that they had for my nephew’s enjoyment).

A Fun Tradition for Kids

2017 was our first Christmas with kids. Our eldest was only 10 months old but we still brought the elf out anyways. I even took a few cute pictures of them in matching outfits to use for our Christmas cards. It would be another year or two before he really got into looking for the elf and having fun with him. I debated getting my original elf from my parents but the $3 ornament from Target had become a family tradition by this point. So, Willfare stuck around and continued to bring us enjoyment.

It would be another year or two before the kids would start to enjoy him. We started simple and would just move him around for them to find. This kept things stress free for us and the kids. He rarely did elaborate displays and was often just sitting in a new spot around the room. We have continued with this laidback tradition but we do occasionally incorporate more creative poses. Our elf does bring a letter of the day for our ABC Christmas Countdown which you can find more information about on the Little Learning Moments Instagram Page.

Keep the Elf on the Shelf Stress Free

The biggest tip I can give is to keep the elf as low key and stress free as possible. If you decide to get super creative, do so sparingly so that the expectation isn’t high everyday. This helps on the days you find yourself moving the little elf at the last minute. I enjoy setting up cutesy things from time to time which is why I do let my creativity run wild occasionally but it’s not every day.

I also recommend getting other family members involved in your tradition. I’m not the only one responsible for moving the elf around the house. My husband helps move him to various spots on the days I forget or run out of ideas. Two heads are typically better than one after all.

With that being said, I’d love to hear your opinion in the comments below or on Instagram! Are you Team Elf or Team No Elf?